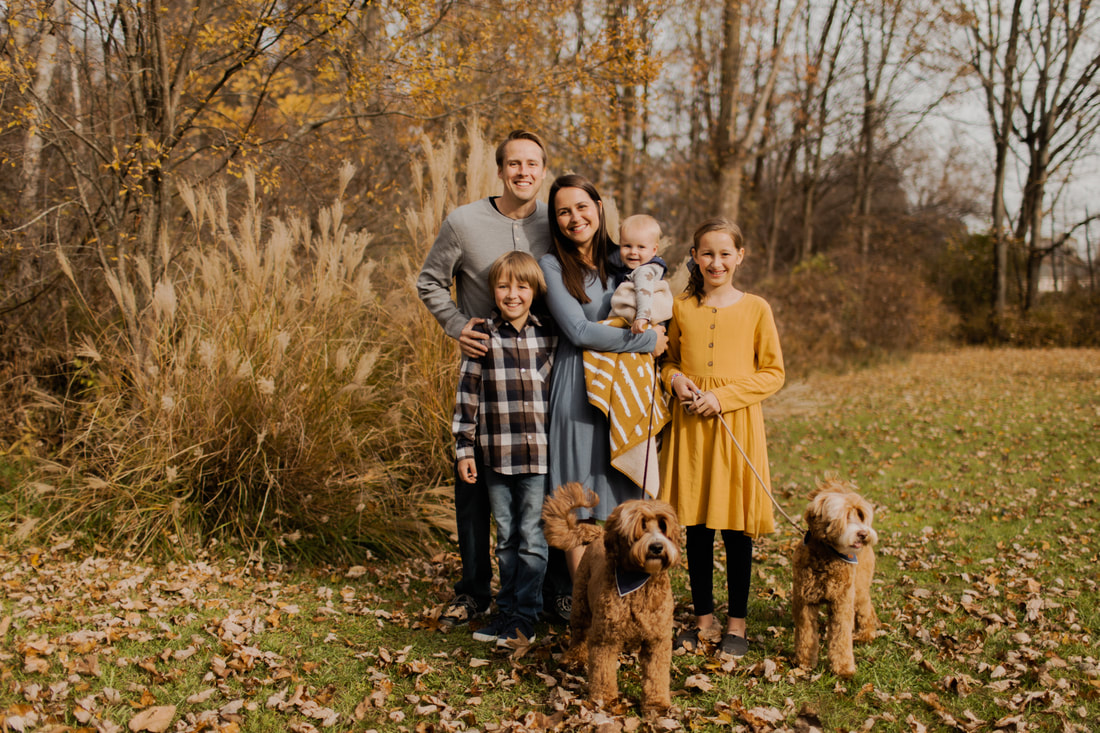 Why Bunji? We wanted a name that would describe Australian Labradoodles in one word. You may not know that Australian Labradoodles were originally bred as therapy dogs in Australia. They were bred to be 'companions.' That was the key. When we discovered that the Australian Aboriginal word for companion or best mate was, 'bunji,' we knew we had our name! There just isn't a better way to describe these sweet dogs than as a companion... a close friend, and joy.


Meet the Carlson's! We are a fun loving family that has huge hearts for animals. We have 3 young children and homeschool the older two. They absolutely love the dogs and are a great help with socializing the puppies. We are very passionate about animals and their proper care and treatment. Our children have grown up to love and respect all animals. We enjoy living as naturally as possible and love anything outdoors. We live on a little over 2 acres in Sparta, MI (15 minutes north of Grand Rapids) with the addition of our two dogs - Riley and Happy, two cats - Tango and Mango, and 18 spoiled chickens (that all have names).


Meet Jen! Jen is the fuel behind this entire dream and it has been a long time coming. When Jen was a teenager, she showed and bred her Australian Shepherd, Payton. Payton sparked Jen's passion. Jen and Cavan got married in 2007, had their first child in 2009 and adopted another loving Australian Shepherd that same year. When their sweet old Aussies passed away in 2014, Jen decided to get a lower drive breed that was excellent with children. She also wanted a dog that would not shed but had the smarts and certain look she was attracted to. She met an Australian Labradoodle while living in South Carolina and instantly fell in love. After moving back to Michigan, Jen worked part-time at the veterinary hospital that she worked in as a teenager. While there, she met a client that bred the same Australian Labradoodles Jen had come to love. After helping the breeder whelp and socialize several litters, Jen couldn't resist the call to start her own program, but she wanted it to be special. Having shown Payton in the show circuit when she was younger, Jen had become passionate about the proper care and continued training of dogs. She had become proficient with positive clicker training, trick training, agility, and even rally and therapy work. Her six years of veterinary assistance was also very influential. She understood the benefits, limitations, and even the harm of some entrenched veterinary practices today and had become a disciplined researcher of the best ways to improve the breed. Jen's focus on a natural, organic lifestyle has also provided a sound foundation for everything, even affecting the selection of the best food for the dogs, and the most natural and least invasive medical treatments. And if that weren't enough, Jen just loves babies of all kinds, especially puppies. She has a passion to offer the most beloved puppies as family pets available today. At the same time, she wants to make sure her 'babies' are placed in the most loving and nurturing home environments.